The Phelps Organ at Hexham Abbey

Move your mouse over the film strip to see the enlarged picture! 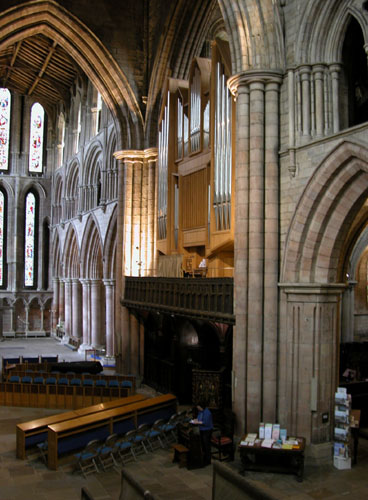 The Phelps Organ at Hexham Abbey was the first modern mechanical-action instrument built in the United States exported to Europe, reversing centuries-old cultural flow. It was part of the 1300th anniversary of the Abbey, an event in which Queen Elizabeth participated in during the September 1974 celebration.

The design of this instrument has some unique qualities. There are small doors in the back of the case which can be opened to allow sound into the area behind the instrument. The organ case itself is made of unfinished but highly polished oak. The tonal design is very complete and thus can accomodate a very wide range of organ literature. This instrument is a good example of what can be achieved in a two-manual specification; see the article on "Designing a Two Manual Organ". It probably has had the most commercial recordings made of any of the Lawrence Phelps & Associates instruments.